Today Michelle Hauck and Rockstar Book
Tours are revealing the cover for GRUDGING, Birth of Saints Book One series which
releases November 17, 2015! Check out the gorgeous cover and enter to win a copy
if the eBook!
On to the reveal! 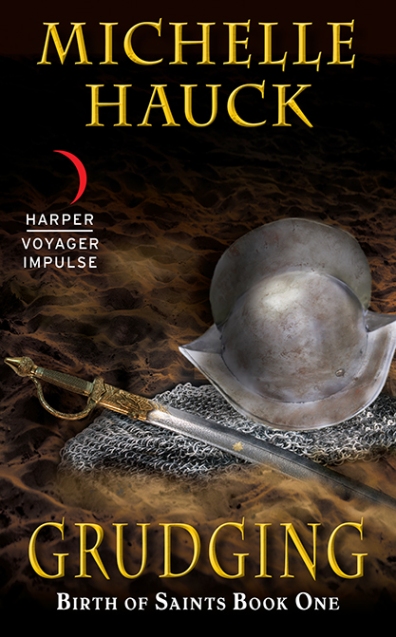 A world of chivalry and witchcraft…and
the invaders who would destroy everything.
The North has invaded, bringing a cruel
religion and no mercy. The ciudades-estados who have stood in their way have
been razed to nothing, and now the horde is before the gates of Colina
Hermosa…demanding blood.
On a mission of desperation, a small
group escapes the besieged city in search of the one thing that might stem the
tide of Northerners: the witches of the southern swamps.
The Women of the Song.
But when tragedy strikes their
negotiations, all that is left is a single untried knight and a witch who has
never given voice to her power.  And time is running out.
A lyrical tale of honor and magic,
Grudging is the opening salvo in the Book of Saints trilogy.
About Michelle:

Michelle Hauck lives in the bustling
metropolis of northern Indiana with her hubby and two teenagers. Two papillons
help balance out the teenage drama. Besides working with special needs children
by day, she writes all sorts of fantasy, giving her imagination free range. A
book worm, she passes up the darker vices in favor of chocolate and looks for
any excuse to reward herself. Bio finished? Time for a sweet snack.She is a co-host of the yearly contests Query Kombat and Nightmare on Query
Street, and Sun versus Snow.Her epic fantasy, Kindar’s Cure, is published by Divertir
Publishing. Her short story, Frost and Fog, is published by The
Elephant’s Bookshelf Press in their anthology, Summer’s Double Edge.
She’s repped by Sarah Negovetich of Corvisiero Literary.