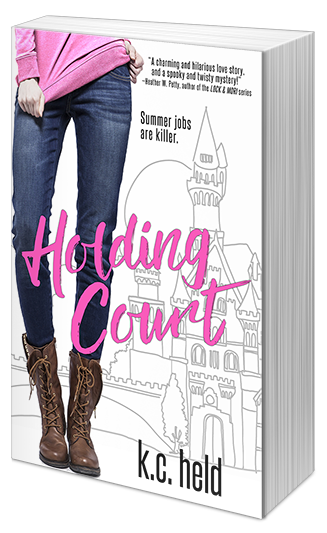 Sixteen-year-old Jules Verity knows exactly what’s in store at her new job at castle-turned-dinner-theater Tudor Times. Some extra cash, wearing a fancy-pants dress, and plenty of time to secretly drool over the ever-so-tasty–and completely unavailable–Grayson Chandler. Except that it’s not quite what she imagined.

For one, the costume Jules has to wear is awful. Then there’s the dead body she finds that just kind of…well, disappears. Oh, and there’s the small issue of Jules and her episodes of what her best friend calls “Psychic Tourette’s Syndrome”–spontaneous and uncontrollable outbursts of seemingly absurd prophecies.

The only bright side? This whole dead body thing seems to have gotten Grayson’s attention. Except that the more Jules investigates, the more she discovers that Grayson’s interest might not be as courtly as she thought. In fact, it’s starting to look suspicious…

In Holding Court, sixteen year-old Jules Verity, who has an embarrassing psychic gift she can’t control, takes a job at a castle-turned-dinner-theater called Tudor Times. All she wants is the chance to make some money, wear a fancy gown, and ogle her crush, Grayson Chandler, from afar. But when she stumbles over a dead body that promptly disappears she must prove she didn’t hallucinate a dead girl before the killer strikes again.

Family background: Only child of divorced parents, currently resides with mom and grandma

Occupation: Tudor prophetess (because that sounds better than the Mad Maid of Kent)

Short term goal: Earn enough money to buy a car (because no one wants to drive to school in a hot pink golf cart)

Ideal date: Watching The Princess Bride with Grayson Chandler (like that would ever happen)

Greatest regret: Getting suspended for that blurting episode in 6th grade

Major problem to solve: Find the dead body, avoid becoming the next victim 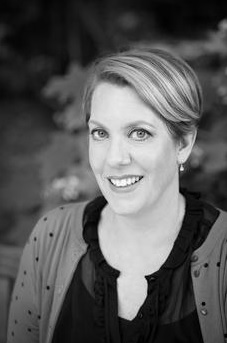 K.C. HELD was born and raised in California with stopovers in Honduras, Mexico, and France. Married to her high school sweetheart, and mom to two avid bookworms, she holds an MFA in costume design and is an accomplished seamstress with a background in opera, theater, film, and television. Although she once spent a summer working in a castle, there were no dead bodies involved.