Entertainment Weekly chose Geek Love for Oregon. The magazine said, “A twisted couple populate their freak show with their own children in this modern classic. It’s weird, carnivalesque, and unnerving: not unlike Portland on a given night. Need more? Kurt Cobain was a fan.” 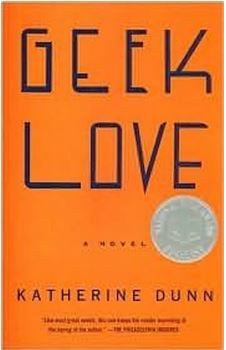 Source: Audible
Audiobook, 15+ hours
I am an Amazon Affiliate

Geek Love by Katherine Dunn, narrated by Christina Moore, is a family saga of love, obsession, and revenge among the freaks at the Binewski traveling show. In many ways this novel reminded me of American Horror Story: Freak Show. Al and Lil populate the show with their own children, those they have disfigured by ensuring Lil drinks and subjects herself to all manner of poisons, insecticides, and other torturous devices. Their efforts to save the traveling carnival from bankruptcy requires more than traditional dwarfs and extraordinarily tall men and women. The Binewskis have concluded that the rise of basketball and other entertainments have made these traditional freak show participants obsolete.

Much of this is narrated by Oly, an albino hunchback, as she recalls the past and her brother Arturo the Aquaboy, who became so consumed with jealousy, that he would do anything to be on top and take over the carnival from his father. Oly, despite being a hunchback, is on the outside of the clan, and she’s treated more as a servant than a family member, even by the brother she loves beyond all reason. While her relatives seek to get by under Arturo’s reign or escape it, Oly seeks to bind herself to him in the only way she knows.

Dunn’s novel examines the love inside an family of freaks, but it really could apply to any family, especially if jealousies are allowed free reign and grow out of control. What’s interesting is how much Oly is unlike her family in that she sees the “norms” as not something to be despised, but as something that could be loved. Her transformation and distance from her family is complete later on in the novel when she gives birth.

Christina Moore does an admirable job with the narration, and it is easy to follow each character. However, the setting in Oregon is not front-and-center and many times, readers will forget that the carnival is even in the state, particularly when other cities in other states are more frequently mentioned like Spokane. Geek Love by Katherine Dunn, narrated by Christina Moore, takes a while to get used to, and there is some very strong language and sexual content that some readers would not prefer. Overall, the novel was just plain odd.

Katherine Dunn is best known for her beloved novel “Geek Love,” which was a finalist for the National Book Award in 1989. She is also the author of the novels “Attic” (1970) and “Truck” (1971). A fourth novel, entitled “The Cut Man,” has been in-progress for decades and was purportedly scheduled for a September 2008 release.

Dunn is also known as a prolific sports journalist in the field of boxing, and has written several articles on the subject.

Four years ago, I thought my life was pretty normal for a teenager. Three years ago, my world was shattered, and now I’m just trying to hold the pieces together. But regret and anger aren’t so easy to ignore.

I thought I might finally be ready to move on from that horrible night, but then he decided to come back.

He can’t come back … he’ll ruin me completely.

One horror-filled night changes the course of Samantha’s seemingly normal life. She’s ruined everything. Despite her determination to keep the family ranch up and running, her guilt makes it impossible to completely move on or forget.

Sam takes comfort in her quirky, endearing friends as she tries to balance between the girl she was and the woman she wants to become. Just when she thinks she’s finally making amends with her past, someone she never thought she’d see again returns, and Sam’s life is once again turned upside down. Both her head and her heart want different things, so she’s lost when, once again, she’s forced to make a decision that will inevitably change her life.

Lindsey Pogue has always been a little creative. As a child she established a bug hospital on her elementary school soccer field, wrote her first YA manuscript in high school, and as an adult, expresses herself through writing. Her novels are inspired by her observations of the world around her—whether she’s traveling, people watching, or hiking. When not plotting her next storyline or dreaming up new, brooding characters, Lindsey’s wrapped in blankets watching her favorite action flicks or going on road trips with her own leading man.

Today Jennifer Bardsley and Month9Books are revealing the cover and first chapter for GENESIS GIRL, which releases September 27, 2016! Check out the gorgeous cover and enter to be one of the first readers to receive a eGalley!!

A quick note from the author:
“The first time I saw the cover to Genesis Girl I got chills. Genesis Girl is a psychological, Sci-Fi thriller, and the blood-red cover conveys that perfectly.”–Jennifer Bardsley

Fifty years ago cell phones unleashed a Brain Cancer Epidemic.
Terrified by technology, worried parents entrusted their children to a charismatic leader.
Barbelo promised to keep his Vestals safe from the Internet, hidden behind lead-lined walls.
Now, digital purity is valuable and a Vestal named Blanca is auctioned off to the highest bidder.
Blanca is the most obedient eighteen-year-old her purchasers have ever met.
She is a blank slate for the genesis of anything they want.
But too bad for Blanca.
Their new beginning could be her end.

On to the reveal!

Eighteen-year-old Blanca has lived a sheltered life. Her entire childhood has been spent at Tabula Rasa School where she’s been protected from the Internet.

Blanca has never been online and doesn’t even know how to text. Her lack of a virtual footprint makes her extremely valuable, and upon graduation, Blanca and those like her are sold to the highest bidders.

Blanca is purchased by Cal McNeal, who uses her to achieve personal gain. But the McNeals are soon horrified by just how obedient and non-defiant Blanca is. All those mind-numbing years locked away from society have made her mind almost impenetrable.

By the time Blanca is ready to think for herself, she is trapped. Her only chance of escape is to go online.

Jennifer Bardsley writes the parenting column “I Brake for Moms” for the Sunday edition of The Everett Daily Herald. She also blogs at Teaching My Baby to Read with the mission of sparking a national debate on the important roll parents play in education. Jennifer is a graduate of Stanford University and a member of SCBWI. She lives with her husband and two children in Edmonds, WA.

GENESIS GIRL will release in 2016 and is about an 18 year-old girl whose lack of a virtual footprint makes her so valuable that she is auctioned off to the highest bidder, the sequel  will come out in 2017. Jennifer is represented by Liza Fleissig of the Liza Royce Literary AgencyLLC.
Follow the Jennifer on Facebook, Twitter, Instagram, and Goodreads

When British playwright Stefan returns to Chicago to get back with his ex-lover Dana, he is shocked to meet her twin sister Tess who informs him that Dana died a year earlier. Though Stefan is distraught about Dana, Tess mesmerizes him and he vows to get closer to the beautiful, black psychologist.

Because she does not trust him, Tess does her best to fight her attraction for Stefan but loses the battle. Before she realizes it, Stefan has swept her up into a wild affair full of kinky trysts that pushes Tess physically, emotionally, and mentally.

Even though they try to keep things sexual, Stefan and Tess end up in love but will see that it is much easier to share a bed than to open your heart.

Stacy-Deanne (Dee-Anne) is an award-winning author of sweet to sensual romantic suspense, contemporary romance, and women’s fiction books. She’s written Amazon Top 100 bestsellers, and her work has been praised and reviewed in USA Today numerously. She loves writing stories that focus on main characters who rarely get the spotlight such as characters with physical disabilities, mental illness, and terminal diseases.

With Stacy every book is an adventure.

CJ Carmichael hasn’t been able to get the vivacious blonde he spent four delirious days with off his mind. The blonde who was completely off-limits, but he couldn’t deny.

Tell me a secret….

CJ had no intention of pursuing her, but Tara Stevens knew what she wanted and it was him. Now six months later, their time together still haunts him. As much as he’s tried to talk himself out of seeing her again, the craving is just too powerful.

Sometimes, beneath the sweetest secrets are the most deceptive lies.

M. NEVER RESIDES IN NEW York City. When she’s not researching ways to tie up her characters in compromising positions, you can usually find her at the gym kicking the crap out of a punching bag, or eating at some new trendy restaurant.
She has a dependence on sushi and a fetish for boots. Fall is her favorite season.
She is surrounded by family and friends she wouldn’t trade for the world and is a little in love with her readers. The more the merrier. So make sure to say hi!