Learning to Breathe is now LIVE!!!

Learning to Breathe – A second chance at love story

Since her husband’s death, Sally Levenson’s life has become dull and monotonous. She’s the county Coroner, and while the dead reveal their secrets on the exam table, she hides from the living. But hiding isn’t working anymore. Sally is trapped in a bland, colorless existence. She can’t breathe! She’s suffocating and wants more, whatever that might be.

When the dark and mysterious Derek Lemark enters her world, he opens doors to new possibilities, reveals dark desires, and challenges her to take a second chance on life. He dares her to breathe again, and promises…more. But what he offers comes at a price.

Sally must choose: take the next step, or speak the one word which will end everything before it even begins.

☆¸.•*¨*★☆ Bonus Content ALERT! A newsletter mini-series will unfold in The Collective Newsletter. To see how the story unfolds you must sign up for the newsletter. ☆¸.•*¨*★☆

“You know that book that you are all into and you can’t turn the pages fast enough? That is this book.” – Amazon Reviewer

“WOW, this story….. I felt my heart pound faster and I couldn’t catch my breath throughout the book.” – Amazon Reviewer

“Have you ever experienced grief? Grief so tremendous it paralyzed you in fear at the thought of moving on? Living day to day going through the motions but knowing there had to be something more? In Learning to Breathe, Ellie Masters tells the captivating story of Sally, a woman who has suffered great loss and has hidden herself from the world, her feelings, and life – and Derek, a confident, rich man who knows exactly what and who he wants. Derek opens Sally’s eyes to new, exciting, sexy and unconventional things. Their relationship taps into passion and hidden desires deep within Sally that she never knew existed. But it all comes at a cost. Will she choose this new life that brings her great pleasure or retreat once again to the familiar, safe, mundane, and unimaginative life she led before? As part of The Collective, Ellie has written a beautiful story with strong characters. I loved this story –a definite must read.” – Amazon reviewer

BUY NOW or read for FREE on KU

YOU WANT A SNEAK PEEK AT ” LEARNING TO BREATHE”??

The light streaming in from the hallway dimmed and a man’s chuckle drifted to her ears. It did strange things to her insides. Yummy things.

She spun around. “Derek!”

He spread his arms out, welcoming her into his embrace, and his expression was one of wonderment. “My God, you’re stunning.”

Heat filled her cheeks. She was hoping for a good but stunning would do. Then she smiled, shifting her eyes down and to the left. She couldn’t look at him and speak at the same time.

“You look pretty amazing too.” But she did peek, lifting her gaze up to take him in.

Decked out in a tuxedo, the immaculate suit barely contained his muscular frame. Crisp and pressed, the bow tie wrapped snuggly around his neck. He carried himself with ease, as if he’d been born in the elegant attire. Incredibly brilliant blue eyes flashed with mischief.

And she was. She couldn’t help herself. He was a magnet, an irresistible force she couldn’t resist, but his words had her lowering her eyes again, as if she didn’t dare stare upon his brilliance.

He closed the distance, and placed one finger under her chin. Lifting, he forced her to meet his eyes. “I’m not laughing, my dear. I’m simply enjoying the fact I’m not the only one caught breathless. I’ve missed you.”

Derek placed his hands on her bare shoulders, steadying her in the too high heels. Two glasses of wine shouldn’t have her weaving on her feet. Or was that him making her weak in the knees?

He took her lips, smothering her in a kiss, taking her breath, and making it his. Her tiny gasp gave him the opening he needed to slip his tongue inside, and like any other invader, he plundered and ravaged, taking what he desired. She bent before him, conquered by his power and more than willing to sacrifice herself to his need.

Tracing the hardened muscle under his tuxedo became her sole purpose in life. As wonderfully intoxicating as the kiss was, it frightened her because of how uninhibited her response was. It didn’t make sense. While the rational side of her brain said slow down, her hand fluttered, and her fingers gripped the buttons of his shirt, pulling him closer rather than pushing him away.

This was what she wanted. Right? Unrestrained passion? But, she needed to play a little hard to get. Otherwise? How would he ever respect her?

Derek groaned, a deep throaty rumble of desire. The noise made her heart race, or maybe it was the kiss. His tongue darted around her mouth, teasing and tasting. He nibbled her lower lip, eliciting a moan from her, and sucked it into his mouth.

Wine had nothing to do with her knees giving way. Derek wrapped an arm around her waist and held her against him, making her feel safe. He didn’t even break the kiss, continuing the pillage of her mouth. Damn, he had this kissing thing down. 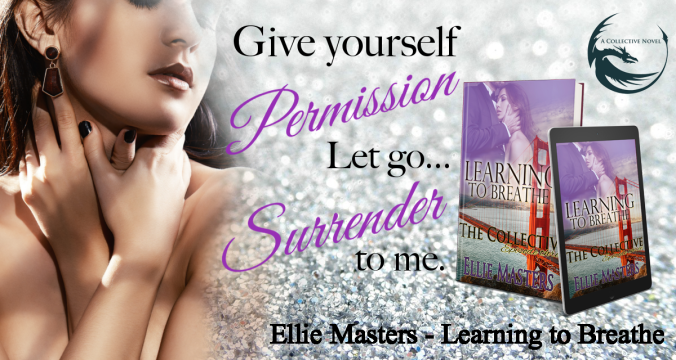 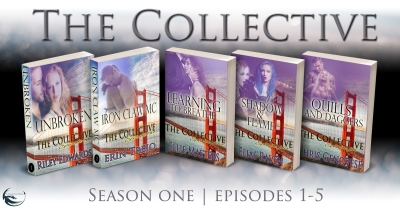 “This crossover series is a huge win for all the authors involved. Don’t miss any of the releases. Each book will pull you in, leave you wanting more while you teeter on the edge of your seat with suspense.” AmazonReviewer

We’ve set the stage, created the characters, and fashioned a world full of twists and turns. Now it’s your turn to sit back and immerse yourself in this incredible series. Each episode weaves the characters and storylines of five standalone novels together to give you an epic crossover series. We’ve left you breadcrumbs, tidbits of information intertwined throughout our stories. Can you find them? Can you collect the clues we’ve left behind? Will you become part of The Collective and help solve the case?

*Featured authors in order of appearance-