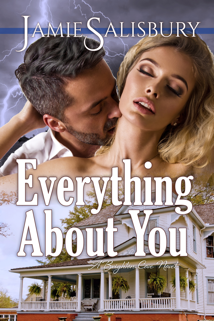 Everything About You (Brighton Cove series-book 1)

Audrey Cooper has good memories Brighton Cove, Maine. She just hopes the quiet, coastal village holds enough of them to silence the echoes of the living hell she endured as a captive in the Middle East. Her career as a journalist is over, but maybe—someday—she can convince her terrified muse to come out of hiding.

As she renovates the farmhouse she inherited from her grandparents, with her cat as her sole companion, she learns to live with the loneliness…until the day a handsome stranger with dark, haunted eyes helps her change a flat tire.

As an artist, widower Lincoln Stewart has an eye for detail, and there’s no missing that unmistakable spark of connection. In Audrey’s company, two years of grief ease into bittersweet memory, and he finds himself envisioning a future as colorful as his paintings. A future with Audrey.

Through violent thunderstorms and terrifying flashbacks, Audrey and Linc discover their broken pieces fit perfectly—in and out of the bedroom. But in the shadows, a very real threat lurks. Someone who’ll stop at nothing to burn their rediscovered dreams to the ground.

Having stocked up on groceries and other essential items, I began the trip to my new home a few miles outside town. I hadn’t gone far when I realized by the thudding and the way the SUV was handling that I had a flat tire. Brand-new vehicle. Great.

I pulled off to the side of the road and got out to assess the damage. The tire was most definitely flat—probably from a nail near the house. I would need to speak with the contractor about cleaning up the area directly around the house and remember not to park too close to the site. Lucky for me, I’d stowed the shopping bags in the backseat. Getting the spare tire out of the wheel well should be a cinch. I turned on the hazard lights and popped the back hatch.

A few minutes later, I had the jack in place and was struggling to loosen the tire bolts. They were on tight, as they should be, but it made it harder for an average woman to change the tire. There had to be an easier way. This was too much like work.

I was standing up after having taken off the last bolt when a white SUV pulled in behind me with a man inside. Help was here. He walked up, and the first thing I noticed was his dark eyes. They were the most beautiful shade of brown I’d ever seen on a man. Scorching. Then he put on a pair of sunglasses. Still, he was handsome, with his matching dark brown, shoulder-length hair, peppered with gray. He was tall and lanky and appeared quite buff. Judging by the tan he was sporting, he might work outdoors.

“Need some help?” he asked in a gravelly voice.

“Yes, please.” I nodded, not knowing if I could speak coherently if he asked me anything more. My heart was in my throat, and gooseflesh covered me. How could I be so instantly attracted to someone?

“I see you’ve done the hard part. I’ll pull this tire off and get you back on the road in a few minutes.”

I watched him as he pulled off the flat and looked it over before grabbing the spare from the back. He had to be at least six foot three, and he even walked sexy.

“Looks like you ran over a nail. Need to stay out of construction sites.”

He bent over and picked up one of the lug nuts. The view of his tight ass in those formfitting jeans was heaven. I wondered if he was married. I hadn’t noticed a wedding ring. Hell, that didn’t mean a thing these days.

A few minutes later, he was finished and everything was stowed back in my vehicle.

He straightened and dusted off his hands before he held one out to me. “I’m Linc, by the way. If you need someone to fix your flat, go see Curtis. Tell him I sent you, and he’ll make sure to get it repaired quickly.”

“Thank you, Linc. I’m Audrey,” I replied, shaking his hand and hoping I wouldn’t tie my tongue in knots. “What do I owe you?”

“Not a thing.” He grinned. Perfect smile. Perfect man. “You have a nice rest of your day, and remember what I said. Stay away from those construction sites.”

I watched that fine ass as he walked back to his SUV. Damn, I certainly hoped he lived nearby. If he was any indication of what the men looked like around here, I didn’t see myself leaving any time soon.

Writing romance stories with passion and sass, Jamie Salisbury has seen several of her books soar to #1 on Amazon. Her novella, Tudor Rubato was a finalist in the 2012 RONE awards. The cover won for Best Contemporary Cover. In 2014, her novel, Life and Lies was nominated for a RONE in the Erotica category and in 2015 Encore! shared that nomination. Her books are self published.

Music, traveling and history are among her passions when not writing. Her previous career in public relations in and around the entertainment field has afforded her with a treasure trove of endless story ideas.