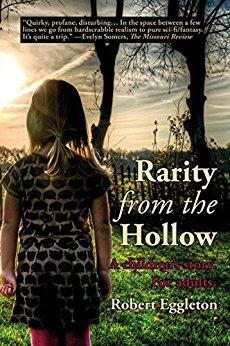 Lacy Dawn’s father relives the Gulf War, her mother’s teeth are rotting out, and her best friend is murdered by the meanest daddy on Earth. Life in the hollow is hard. She has one advantage — an android was inserted into her life and is working with her to cure her parents. But, he wants something in exchange. It’s up to her to save the Universe. Lacy Dawn doesn’t mind saving the universe, but her family and friends come first.

Rarity from the Hollow is adult literary science fiction filled with tragedy, comedy and satire.

“The most enjoyable science fiction novel I have read in years.”
—Temple Emmet Williams, Author, former editor for Reader’s Digest

“Quirky, profane, disturbing… In the space between a few lines we go from hardscrabble realism to pure sci-fi/fantasy. It’s quite a trip.”
— Evelyn Somers, The Missouri Review

. “…a hillbilly version of Hitchhiker’s Guide to the Galaxy…what I would have thought impossible; taken serious subjects like poverty, ignorance, abuse…tongue-in-cheek humor without trivializing them…profound…a funny book that most sci-fi fans will thoroughly enjoy.” — Awesome Indies (Gold Medal)

“…sneaks up you and, before you know it, you are either laughing like crazy or crying in despair, but the one thing you won’t be is unmoved…a brilliant writer.” –Readers’ Favorite (Gold Medal)

“Rarity from the Hollow is an original and interesting story of a backwoods girl who saves the Universe in her fashion. Not for the prudish.” —Piers Anthony, New York Times bestselling author

“…Good satire is hard to find and science fiction satire is even harder to find.” — The Baryon Review

Political Allegory: You may be interested in this press release:  The original © was 2006. You would have to read the novel to find out how Lacy Dawn, the protagonist, convinced Mr. Rump (Bernie Sanders) to help talk Mr. Prump (Donald Trump) into saving the universe. The political allegory includes pressing issues that America is fighting about today, including illegal immigration and the refuge crisis, extreme capitalism / consumerism…. Mr. Prump was a projection of Donald Trump based on the TV show, The Apprentice. Part of the negotiations in the story occur in the only high rise on planet Shptiludrp (Shop Until You Drop), a giant shopping mall and the center of economic governance, now more easily identifiable as Trump Tower. There is no political advocacy in the story, other than sensitizing readers to the huge social problem of child maltreatment, but the allegory is much more obvious now that Donald Trump is a household name. A similar press release can be read here.

On January 20, 2016, Rarity from the Hollow was awarded a second Gold Medal by a popular book review site: https://readersfavorite.com/book-review/rarity-from-the-hollow. Additional praise of the first edition has been posted by book bloggers on Amazon.

I recently retired after 52 years of contributions into the U.S. Social Security fund so that I could write and promote my fiction. I’m a former mental health psychotherapist in West Virginia. But, after coming home drained from working with child abuse victims, I didn’t have the energy left to begin its self-promotion. Author proceeds have been donated to a child abuse prevention program in my home state. http://www.childhswv.org/

A listing of services that are supported can be found here

Dog Horn Publishing is a traditional small press located in Leeds. Adam Lowe is the owner. The press also showcases other semi avant garde titles and publishes a popular magazine for the GLBTQ community (Vada).