For more information on the United States of Books (click here for details).

The United States of Books the State of Kentucky 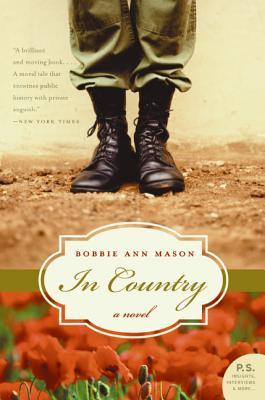 Reviewer ~ Teri at Sportochick’s Musings
Release Date:05-03-11
~ Synopsis ~
The bestselling novel and deeply affecting story of a young girl who comes to terms with her father’s death in Vietnam two decades earlier
In the summer of 1984, the war in Vietnam came home to Sam Hughes, whose father was killed there before she was born. The soldier-boy in the picture never changed. In a way that made him dependable. But he seemed so innocent. “Astronauts have been to the moon,” she blurted out to the picture. “You missed Watergate. I was in the second grade.”She stared at the picture, squinting her eyes, as if she expected it to come to life. But Dwayne had died with his secrets. Emmett was walking around with his. Anyone who survived Vietnam seemed to regard it as something personal and embarrassing. Granddad had said they were embarrassed that they were still alive. “I guess you’re not embarrassed,” she said to the picture.
~ Review ~
In Country takes place in Hopewell, Kentucky and is the story of recent high school graduate Sam and her Uncle Emmett, a Vietnam war vet. Sam is searching for the answers to the past regarding her dad and why her Uncle is so messed up. Emmett is just trying to survive and live one day at a time after returning broken from Vietnam.
Sam has a strong desire to know more about the father she never meet, a farm boy, who went to Vietnam and never came back. So she begins her search by asking any one she knows about her dad. There is a point where I felt she would drive me crazy with the persistent questions but the author smooths out this roughness with resolutions to some questions via talking to her paternal grandparents and her mother Irene. Through a series of letters and a diary she finds answers that bring her peace and upheaval as well. This upheaval causes her to be able to finally make a decision on how to move forward with her life.
Another part of the story that drove me crazy was her constantly hounding her Uncle about all the things she felt was wrong with him medically. I understand her love for him and her desire for him to not die but yikes the constant harping what was wrong with him was too much. She was a hypochondriac for him.
Emmet and some of his war friends portray an intricate part to the story with their inability to have relationships, work, and socialize plus their various health issues. But also added to the story were other war vets that were able to have normal lives. This balance greatly added to the story and it’s correctness to real life. The scene where Tom, a war vet, spent time with Sam was painful and sad causing me to wonder was there ever a time after that that he was able to love someone and be fulfilled.
At one point in the book Emmet says, “There’s something wrong with me. I’m damaged.” that I started to cry. There was overwhelming pain for all of them and grief for my part in disassociating myself from this area of life. It dawned on me that we were all damaged in some way from this war.
My Thoughts:
This book caused me to think and open my mind to a time in my life that I had shutdown.
But it is much more than that for me; it brought forefront in my mind the suffering of the returning vets in regards to their families, health, mental well-being, as well as how the government and society in general treated them. This book profoundly affected me.
Though this book and its narration may not be for everyone, I listened to it three times because of its impact to me and how it caused me to see things from a new perspective. For this reason, I give it 4
STARS.