Blurb:
A famous child psychologist, who has authored several bestselling books on raising children, discovers he doesn’t know as much as he thought he did when he meets a pediatrician and mother of three. Neither of them imagined how their lives would change when they shared a flight headed for Las Vegas for a medical convention.
For Jack Winston and Victoria Feingold, whatever happens in Vegas doesn’t stay in Vegas. It follows them back to Chicago.
Jack doesn’t want to fail, but he’s not sure he’s emotionally prepared to live with Victoria’s three children. Not to mention her mother, sister, dog, and needy ex-husband.
Grand Central Station is a fast-paced ride and a lot of fun! 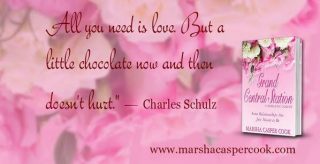 Marsha is a Chicago screenwriter, as well as an author and radio show personality on Blog Talk Radio. Her World Of Ink Network partner for the last five years is V.S.Grenier, author, editor and radio show host who lives in Utah. Marsha’s group discussions are about writing and publishing. She also does special shows on many subjects but every year for the last five she has an OCTOBER BREAST CANCER AWARENESS SHOW.